This California Hike Leads You to Seven Waterfalls

There’s so much to do outdoors in California’s Central Coast area that sometimes it’s hard to know where to turn. Those who love to hike may want to put Seven Falls Trail in California at the top of the list. It’s an opportunity to see stunning waterfalls tucked in a rugged wooded area, and maybe go for a quick swim.

To reach Seven Falls, you’ll start out on a paved road, which soon turns to dirt. For the last stretch, you may be hopping from rock to rock, climbing boulders, and sloshing along in the creek.

Are you up for this kind of adventure? Let’s go!

Where Is Seven Falls Trail in California?

Seven Falls Trail is in the gorgeous city of Santa Barbara, on the edge of the Santa Ynez Mountains. It hugs the Pacific coastline about 30 miles north of Ventura and about 100 miles from Los Angeles.

The trailhead, which also leads to Inspiration Point, is on Tunnel Road, about 6 miles inland from U.S. 101. The trail runs along Mission Creek in an area known as Los Padres National Forest.

You’ll want to park along the street, just north of Santa Barbara Botanic Garden. (Be sure and park only in a lined space.)  The Santa Barbara Trails Council provides detailed directions.

How Long Is Seven Falls Hike in Santa Barbara?

From the trailhead, it’s a little over a mile and a half to Seven Falls, and then you’ve got to double back. The online resource AllTrails lists the round trip as 3.2 miles with an elevation gain of 803 ft.

If all runs smoothly, the entire route should take an average of an hour and 37 minutes. How long the hike takes depends on your pace, of course, and how much time you spend enjoying the different features.

AllTrails calls it moderately challenging, but for some hikers, it can be a frustrating experience for a couple of reasons. Parts of the trail are not clearly marked, so figuring out which way to go can be tricky or confusing.

Also, toward the end of the trail, you have to climb a few large boulders to get close to the falls.

“Would definitely consider this on the harder side of moderate,” wrote an Alltrails user named Austin. “Keep your head up because it’s very easy to take the wrong trail. Other than that, it’s an awesome hike!”

A fellow hiker named Rachel offered this take on the experience: “The first half is just a paved road, but if you go all the way to the pools, it involves some bouldering and climbing. Very fun and beautiful, just should’ve been more prepared for that.”

What Do You See Along Seven Falls Trail?

What you see along the way – and at the end – depends on how much rainfall there’s been lately. At best, it’s three different pools leading to a series of cascading waterfalls.

Frankly, if this part of California is in one of its frequent drought phases, it could be a dry run. Catch it at the right time, though, and there’s no shortage of memorable sights and sounds.

A Google reviewer named Elizabeth Ann gave this rave report: “After rain during winter, it’s absolutely gorgeous!!!! Rushing waterfalls, way more than 7!!!! Definitely dangerous, and there was some rock climbing involved but tons of fun!!!!”

Another Google reviewer, Mimi, offers this advice: “To get to the falls, if you’re going during a fairly dry season, I suggest walking through the creek. It’ll require some climbing over boulders but nothing difficult. It’s such an amazing hike from below as opposed to the top trail. It’s the way less taken.”

According to Mimi, you’ll be able to relish in an enjoyable and quiet walk in nature. When you get to one of the makeshift pools, the natural rocks provide places to climb to “get a different vantage point and see the other ‘pools.’”

Can You Swim in the Pools?

Many hikers on Seven Falls Trail consider splashing in the pools a refreshing and vitalizing part of the endeavor. It’s a wonderful way to cool off from the California heat and even has kind of a celebratory aspect to it.

The hike includes some steep inclines, so this is a reward for your hard work. During periods of abundant rainfall, there’s no reason not to indulge. However, if the pools appear muddy or stagnant, you may want to avoid them this time around.

Your four-legged hiking companions are welcome, too. Leashes are required in some areas, but not all (chances are they’ll be very happy to join you for victory laps in the creek).

Some regular hikers of Seven Falls Trail, however, caution against taking your dogs because of the steep and rocky areas. It may not be the best idea to include your dog if he or she isn’t accustomed to challenging terrain.

Is Seven Falls Trail California Worth the Hike?

Are you all about the destination or the journey? The answer to this question is the key to whether a hike to Seven Falls Trail in California is worthwhile. It can be challenging, for sure, maybe even more so than you think.

The trail is steep, rocky, narrow in places, and hard to even find in others. There’s also poison oak to watch out for in certain areas.

On the other hand, you can look at the search for the hidden falls as a quest worth conquering. You venture off into a forest hideaway in one of the most beautiful sections of California’s scenic Central Coast region. It’s a bit challenging, yeah, but the payoff can be exhilarating.

Will you ever visit Seven Falls? 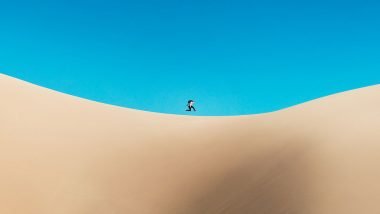 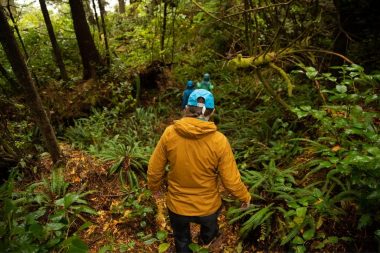 Feel Accomplished After This Challenging Hike in Washington