Old Forge, PA, may not be as well known as Chicago or Detroit, but it should be. Are you wondering why we are lumping Old Forge, a small town of around 8,500 people, in with the likes of Chicago and Detroit? We have our reasons, which might have something to do with pizza.

Keep reading to learn more about pizza and what it has to do with this tiny town in Pennsylvania. Let’s dive in!

Which Town Is the Pizza Capital of the World?

While Detroit lays claim to the city with the most independent pizzerias per capita – 6 per 100,000 residents – Old Forge, PA, is the pizza capital of the world. At least their residents like to think so. Is there anything wrong with being proud of where you live because of its pizza?

We think not. After all, pizza is one of the most loved foods globally. If you have several unique pizzerias within a tiny community, you deserve to call yourself the “Pizza Capital of the World.” Even if it is a self-proclaimed title.

Old Forge, PA, is a historic town in the Appalachian Mountains. The town incorporated itself in 1899 and quickly became a hub for coal mining activity. At its peak, Old Forge was home to around 14,000 people. However, the town began to decline after a coal mining strike in the early 1900s led many residents to leave in search of new opportunities.

Old Forge is also notable for its pizza history. Italian immigrants who came to work in the mines brought their love of pizza. Due to the practicality of folding and eating pizza cold, it quickly became a staple food for miners.

Today, Old Forge is the “Pizza Capital of the World” and continues to be popular among its 8,500 residents. It’s a popular destination for traveling pizza lovers.

Old Forge, Pennsylvania, is a close-knit community that extends to the local pizzerias. The owners of these businesses are firm believers in the quality of their pies, and they’re always happy to share a slice or two with anyone who stops by.

There’s a sense of camaraderie among the pizza makers, and they’re always keen to chat about the latest developments in the industry. Many pizzeria owners grew up together, and now they eat and make pizza with each other. This collaborative spirit is what makes Old Forge pizzas so unique.

But it’s not just the community that makes Old Forge, PA, pizza different; it’s also the pie. Pizza history here dates to 1926, when long-time Old Forge residents, the Ghigiarelli family, began serving pizza in their tavern to the coal mine workers. They baked and served them in rectangular metal pans instead of circular pies. Other pizza makers followed suit, creating a unique pizza many still know.

There’s also proper terminology for pizza eaters in this town. Pizza doesn’t come in a slice but rather a cut. It’s not a pie, but a tray. While each pizza chef offers many creative topping options and will happily share those recipes, cheese seems to be the secret topping. That might be the only competition between these pizza pioneers.

Traveler’s Tip: After enjoying some pizza, grab an ice cream cone at C and C Creamery: An Oldschool Treat in PA You Won’t Want to Miss.

How Many Pizzerias Does Old Forge, PA, Have?

While cheese may cause some competition, the pizzerias usually aren’t antagonistic. After all, if you’re claiming a town is the “Pizza Capital of the World,” you’d better have more than one pizzeria. So, how many pizzerias are in Old Forge, PA?

With over 160 pizzerias in Lackawanna County, where Old Forge lies, at least eight call the town of Old Forge home. That’s at least one pizzeria per every 1,000 residents. Calling Old Forge, PA, the “Pizza Capital of the World” sounds like a relatively honest title to us.

What Kind of Cheese Is On Old Forge Pizza?

Now, about cheese. With cheese being a crucial ingredient in pizza, we can see why keeping your cheese a secret might be a wise decision. There’s not one distinctive flavor or type of cheese in OId Forge pizzas.

Some may use one type of cheese, while others use many combinations. From what we understand, there isn’t a recipe to follow that instantly defines an Old Forge pizza. Instead, we must go back to the idea of the pizza community. The community, the rectangular shape, and the pizza terminology make an Old Forge, PA, pizza.

What Is the Difference Between Old Forge and Sicilian Pizza?

Speaking of what makes a pizza an Old Forge pizza, maybe it’s that some say these Pennsylvania pies (excuse us, trays) are similar to Sicilian pies. There may be some similarities, but truthfully, Old Forge pizzas are too unique.

The pizzeria owners in Old Forge, PA, have the utmost confidence in the quality and flavors of their recipes. It’s one of the reasons why they all came together to lay claim to the “Pizza Capital of the World.”

Another significant difference is the crust. Old Forge pizza makers are proud of their breadlike crust, giving patrons a chewy soft center while holding its crispy bottom. Then there’s the sauce. It has a robust flavor, chunkier and sweeter than the Sicilian style.

There’s no wonder what the flavors are in Old Forge pizzas. They are bold and rich. The pizza community in Old Forge, PA, doesn’t leave anything to chance.

Traveler’s Tip: While visiting Pennsylvania Step Back in Time at the Timeline Arcade.

Is Tasting Old Forge, PA, Pizza Worth It?

Detroit, Chicago, and even New York City elicit mouth-watering images of cheesy, crusty pizzas. However, after learning more about Old Forge, PA, and its unique take on pizzas, we’re sure you might be planning an Old Forge, PA, pizza excursion for your next trip.

With its robust, chunky sauce; its chewy yet crispy crust, whatever toppings you can imagine; and cheesy goodness left up to the pizza chefs, we’re not drooling; you’re drooling. We’re confident that tasting Old Forge, PA, pizza is worth it.

Will you stop by Old Forge for pizza the next time you visit PA? 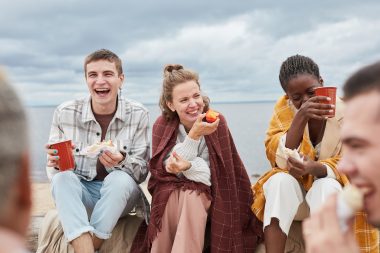 Get Nostalgic at Spring Lake Beach 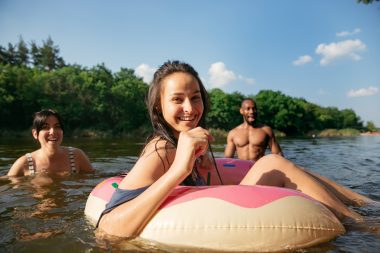 Cool Off at the Highlands Natural Pool in New Jersey