American folklore has evolved ever since the Europeans settled in the colonies. Some are entertaining, like the tales of Paul Bunyan and the Lone Ranger, while others have a more gruesome past like the New England Vampire Panic. Never heard of it? Let’s learn more about Exeter, RI, where families exhumed the bodies of deceased loved ones and burned their hearts, all due to superstition.

Where Is Exeter, RI?

Located in Washington County in the southern half of Rhode Island, the town of Exeter has about 6,500 residents. It extends from the Connecticut border in the west to the town of North Kingstown in the east for a total area of about 58 square miles.

Exeter, RI, is home to the only ski resort in Rhode Island and several historic buildings like Lawton’s Mill and Queen’s Fort.

What Was the New England Vampire Panic?

Vampires have been blamed for many unexplained diseases and conditions over the centuries. In the 1800s, the New England Vampire Panic was the reaction to a tuberculosis outbreak in Massachusetts, Connecticut, Rhode Island, and Vermont. The most famous case comes from Exeter, RI.

When a family member died of consumption, now known as tuberculosis, other family members sometimes would begin to show signs of the infection.

Paul S. Sledzik and Nicholas Bellantoni wrote about this phenomenon in 1994 in The American Journal of Physical Anthropology. “According to the New England folk belief, the ‘wasting away’ of these family members was attributed to the recently deceased consumptive, who returned from the dead as a vampire to drain the life from the surviving relatives.”

New Englanders believed that to prevent other family members from getting it, you had to kill the vampire by digging up the body of the suspected culprit. If the body had decomposed, there was no concern, and they would rebury it.

But if the body had not decomposed, the family members would remove and burn the heart and other organs. They may even decapacitate it or turn the body over in the grave.

Today, vampires have become an entertaining, sometimes even comical, part of pop culture. But centuries ago, many cultures greatly feared vampires due to the illness they supposedly spread.

Most of the time, family members handled the exhumations, but occasionally clergymen and doctors also joined in. In Rhode Island, specifically, they would tear out the deceased’s heart and burn it in hopes of stopping the vampire from sucking the life out of other family members.

Traveler’s Tip: You need to know the story behind this see through grave in Vermont.

Who Was Mercy Brown?

In the 1880s and 1890s, George and Mary Brown’s family, from Exeter, RI, experienced several cases of tuberculosis. Mary was the first to pass away. Then the oldest daughter, Mary Olive, died. Another daughter, Mercy, died on Jan. 17, 1892, and a son, Edwin, had also become ill with tuberculosis.

Family and friends believed one of the dead family members was responsible for these tragedies. Three dead and one sick couldn’t be a coincidence. At the time, people didn’t understand the nature of tuberculosis, and many false ideas about its causes arose.

So the family permitted the local doctor to exhume the bodies of Mary and her two daughters. Mary and Mary Olive’s caskets were dug up and opened to reveal their bodies had decomposed as expected.

However, Mercy had died in the winter, and the family stored her coffin in a crypt with the intention of burying it once the ground thawed. Thus, in the cold, the body froze. Once they opened the coffin, the townspeople were shocked to see how perfect her body remained.

After further examination, they found blood still in her heart. Thus, they declared her undead and the cause of Edwin’s illness.

The doctor and family burned Mercy’s heart and liver and made it into a tonic with the ashes. They then gave it to Edwin to drink. Unfortunately, this didn’t cure him, and he died a few months later.

Things to Do Near Exeter, RI

Exeter may be famous because of the New England Vampire Panic, but it has evolved over the centuries. Yes, this is a piece of its history, but there’s more to Exeter than superstitious claims and vampirism.

Let’s look at a few things to do that have nothing to do with exhuming dead bodies.

Enjoy year-round fun at Yawgoo Valley Ski Area and Water Park. Splash in the water park during the summer, or bring your skis or board and enjoy the slopes in the winter. The water park operates from mid-June through Labor Day.

And the ski area, Rhode Island’s only one, is open from early December through late March. The 36 acres of skiable terrain includes a 2,200-foot slope. All levels of skiers, from first-timers to experts, can find a slope to fit their abilities.

Wicked Tulips, in Exeter, RI, is the largest tulip farm in New England. The husband-and-wife team of Jeroen and Keriann Koeman opened the farm in 2015. They began by hand-planting 60,000 tulips.

Now they plant 800,000 with a tractor and host the largest u-pick tulip event in New England. Visitors pay for an admission ticket during the spring.

The $20 adult ticket includes the entrance and ten u-pick tulips. You can buy additional tulips for $1 a stem. Note that Wicked Tulips Flower Farm is only open seasonally.

Once you’ve picked tulips, drive northwest about 25 minutes from Exeter to Stepstone Falls near the Connecticut-Rhode Island border. The easy, dog-friendly trail makes it a great family-friendly outing.

Once you arrive at the falls, the amount of water cascading over depends on the rainfall. But regardless, it’s a beautiful sight. The falls splash over ledges, dropping 10 feet over a distance of 100 feet.

According to the Tomaquag Museum’s mission, the purpose of the cultural education center “is to educate the public and promote thoughtful dialogue regarding Indigenous history, culture, arts, and Mother Earth and connect to Native issues of today.”

Mary E. Glasko, known as Princess Red Wing, opened the museum in a friend’s home in 1958. Today you can learn about the indigenous people of Rhode Island through artifacts, artwork, and multimedia presentations.

Covering more than 26,000 acres, Pachaug State Forest is the largest State Forest in Connecticut, just west of the Connecticut-Rhode Island border. And it’s only about a 30-minute drive from Exeter. The Pachaug River runs through the center of the forest.

Many people enjoy camping and hunting here. And you can bring pets. So if you want to see Stepstone Falls, drive another 20 minutes to Pachaug State Forest and enjoy more beautiful scenery with your furry friend.

The Arcadia Management Area protects the Rhode Island half of the pond while the northern portion on the Connecticut side borders the Pachaug State Forest.

Because of the beautifully landscaped shoreline, Beach Pond is a popular destination for vacationers in the summer.

You may have never heard about the vampires in Exeter, RI. Don’t let that history be the final word. Go enjoy the natural scenery of the forests, farms, and falls that Exeter offers.

Learn about the history of the area’s indigenous people or take the kids to their first ski resort at Yawgoo Valley. Whatever you’re looking for, Exeter, R.I., has it. There’s so much more to this town than superstition.

But while you’re there, will you visit Mercy Brown’s grave? 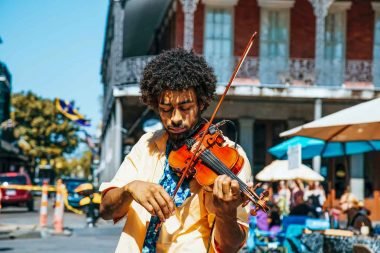 The Big Easy: The Truth Behind This Strange City Nickname 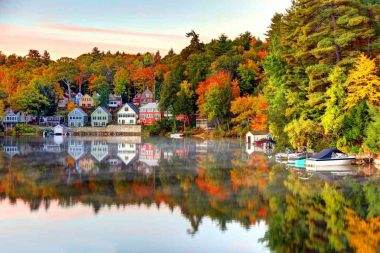 Stunning Lakes in New Hampshire to Add to Your Bucket List