How to Visit Muscle Shoals, Alabama, the Right Way

Nestled in an inconspicuous corner of the south, Muscle Shoals, Alabama, is a small town with a big place in American and music history. While it may not have the profile of a Nashville or Los Angeles, the city has contributed to American music on par with those music meccas.

But long before the studios hit record, Muscle Shoals was also making a significant impact on the history of the region and the country. Let’s take a closer look at what this unique area has to offer.

Muscle Shoals, Alabama, was officially founded in 1923, but its history goes back long before that. Native Americans inhabited the area for thousands of years, enjoying the resources of the river and forests.

During the Civil War, there was frequent action in the area due to its strategic location along the Tennessee River. However, development was slow through the early 20th century until World War I led the federal government to build the Wilson Dam.

What Is Muscle Shoals Known For?

Muscle Shoals is best known for its influential place in music history and the famous “Muscle Shoals Sound.” Major artists from the worlds of soul, R&B, blues, country, rock, and pop have made classic records here. The list includes Aretha Franklin, Otis Redding, Bob Dylan, the Rolling Stones, and more. For more than 60 years, music’s top artists have continued to trek to this out-of-the-way town to take part in its impressive cultural history.

The area is also known for the significant impact of the New Deal-era Tennessee Valley Authority (TVA) on the area. TVA projects helped control the unpredictable Tennessee River, provide power for the region, and create recreational opportunities still cherished by residents.

From music to nature to unique history and culture, Muscle Shoals has a diverse set of attractions that’ll entertain travelers of all tastes. Let’s take a look.

Take a tour and explore the rooms used for some of music’s most famous recordings. You’ll marvel at the decades of vintage recording equipment used to create the studio’s distinctive sound. For music lovers, this is truly a must-see on any visit to the area.

Her story inspired millions. Helen Keller, born blind and deaf, learned to communicate and revolutionized the lives of tens of thousands of deaf-blind people. Her groundbreaking life began just outside of Muscle Shoals, Alabama, in Tuscumbia, at Ivy Green.

Today, Keller’s childhood home operates as a museum and educational site dedicated to teaching others about her triumphs. Visitors can take a tour of the sprawling grounds and modest home. If you’re lucky, you may even grab tickets to a performance of “The Miracle Worker,” the award-winning play about her life.

While FAME may have started the Muscle Shoals music boom, Muscle Shoals Sound Studios has made just as significant an impact. It opened in the late 1960s. It was unique in that it was owned and operated by session musicians who’d formerly worked at FAME. They left to start their own studio.

The studio had a legendary backing band, the Swampers. They played on tracks from artists including the Rolling Stones, Lynyrd Skynyrd, Paul Simon, Willie Nelson, and Cat Stevens. You can take a tour of the facility. See the rooms where the studio cut and mixed those influential tracks.

4. The Wilson Lock and Dam

The centerpiece of a New Deal-era TVA project, the Wilson Lock and Dam is part of an infrastructure project that took decades to complete. The structure soars nearly 140 feet above the water and stretches more than three-quarters of a mile.

The dam’s reservoir created some top-notch outdoor recreation opportunities. These include camping, boating, and walking and hiking on an extensive trail network. It’s also an extremely popular fishing area, referred to by some as the “the Smallmouth Capital of the World.” In addition, a visitor center sheds light on the history and operations of the dam.

As the unquestioned center of the state’s musical culture, it only makes sense that Muscle Shoals is home to the Alabama Music Hall of Fame. Since 1990, visitors have explored the contributions of Alabama musicians of all stripes. The Hall holds inductions every year. The facility also offers educational resources for kids.

Feeling inspired by all these music greats? You can make your own Muscle Shoals recording of your favorite song. It even comes complete with backing vocals and musical accompaniment.

Just across the Tennessee River in Florence, iconic American architect Frank Lloyd Wright left his mark. The Rosenbaum House exemplifies Wright’s “Usonian style” and “organic architecture.” He integrated nature and took a practical approach to modern, middle-class design. Experts will break down this architectural style during a 45-minute tour of the property. Then stop at the gift shop to learn more about Wright or grab a memento.

The TVA strikes again, but this time, the agency has developed a wide-ranging series of trails in the Muscle Shoals area. Stretching 17 miles, this complex contains paved and primitive trails for hikers of all ages and skill levels. Trails range from just a fraction of a mile up to more than 2.5 miles one-way.

The trails also intersect at some points throughout the area, making it easy to create your own personalized hike. While walking, you’ll see numerous historical sites like Civil War earthworks, railroad bridges, the ruins of a WWI-era steam plant, and more. It’s also a popular spot for bird and other wildlife watching.

8. Nearby Indian Mound and Museum

Long before it was known as Muscle Shoals, Alabama, Native Americans lived in the area. This 43-foot-tall earthen mound is believed to be nearly 2,000 years old. It likely represented an important cultural center for local and regional tribes.

Unfortunately, 19th- and early 20th-century development destroyed significant parts of the mound. Still, you can learn a lot about early Native American life here. A small museum explains the history and culture of the people who once used the site. It contains artifacts like pipes, textiles, and stone carvings. You can even climb the mound yourself and try to imagine what the Native Americans who built the site saw when they first scaled it.

Since before the Civil War, this bridge carried streetcars, steam trains, and pedestrians across the raging Tennessee River. Now, the Old Railroad Bridge near Muscle Shoals, Alabama, serves as a peaceful spot to stroll or hold an event. The site has hosted everything from primitive bridges to steam-powered ferries and pontoon bridges.

From the turn of the 20th century until the early 1930s, the current bridge was used for electric streetcars. Then, the bridge fell into disrepair until the 1990s, when preservation efforts began. These created the historical landmark beloved by the community today. Keep an eye out for events like Art and Bluegrass festivals or twice-weekly sunset yoga.

Muscle Shoals, Alabama, is the kind of small-town that draws tens of thousands of visitors a year. And that’s with good reason. This area’s rich music scene, historical heritage, and beautiful natural spaces make it an excellent stop for travelers of any taste. Have you ever swung by this tiny cultural icon?

Don’t Miss Out: While you’re here, make your way through the rest of the state and visit the 7 best small towns in Alabama. 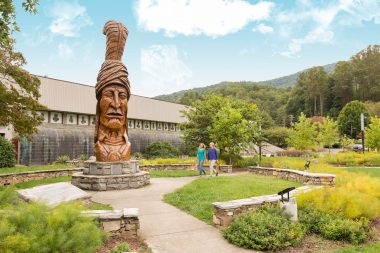 How to Spend a Perfect Day in Cherokee, North Carolina 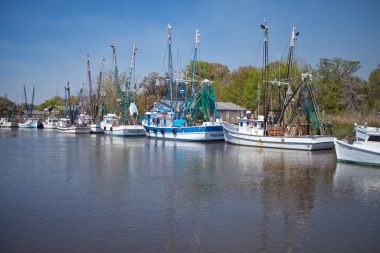 How to Spend a Delightful Day in Darien, Georgia