Plan Your Next Vacation to These Lakes in Upstate NY

You can’t describe New York without mentioning its gorgeous waterways and charming small towns. The scenic lakes in upstate NY are certainly among the main attractions in this incredible region.

Do you want to spend some time along the water in upstate New York? Here are some of the very best places to do it!

What Is Upstate New York Known For?

Before we get started, there’s no strict definition for what constitutes upstate New York, but it’s a vast area.

People generally think of upstate New York as the parts of the state outside of New York City and its immediate suburbs. So it includes both the Catskill Mountains and the Adirondacks as well as the Hudson Valley and Niagara Falls.

The cities of Rochester and Syracuse are in upstate New York, but Buffalo is usually excluded because it’s so far west. Upstate New York also is known for its many smaller towns nestled along the lakes and mountains.

With many acres of farms and forests, upstate New York offers a constant promise of fresh air and natural beauty. In addition, many of the communities have a carefree resort feel with active dining and wine-tasting scenes.

How Many Lakes Are There in Upstate NY?

Some of the best-known lakes in upstate NY are the 11 different Finger Lakes. Two of the Great Lakes are in the region too, and we’re still not even scratching the surface.

It would probably be impossible to visit all of the lakes in upstate New York. At the least, it would be a major undertaking because there are thousands of them.

According to the New York Department of Environmental Conservation, there are more than 7,600 freshwater lakes, ponds, and reservoirs statewide. The vast majority of these are in upstate New York, of course. In addition, the state claims some 70,000 miles of rivers and streams.

What Is the Cleanest Lake in Upstate New York?

Skaneateles Lake is so clean that thousands of people drink from it every day, and it’s barely even treated beforehand. It provides drinking water to nearly a quarter-million residents of Skaneateles and Syracuse.

Because of its remote location, there aren’t many sources of potential pollution. Another reason it’s so clean is its altitude. At 863 feet above sea level, Skaneateles is the highest of the Finger Lakes.

It’s the cleanest lake in upstate NY and the second-cleanest in the U.S., behind Oregon’s Crater Lake.

Traveler’s Tip: While traveling through New York, Live Out Your Fairytale Daydreams at These Castles.

Plan Your Next Vacation to These Lakes in Upstate NY

We’ll narrow down those thousands of lakes in upstate New York to a handful that are certainly worth visiting. Consider these wonderful vacation spots as you explore the incredible areas outside metro New York City.

Location: About 60 miles north of Albany in the Adirondack Mountains.

About: This scenic mountain lake and the city that shares its name have both been popular destinations for generations. You can experience panoramic views of the lake and the surrounding mountains and enjoy attractions like museums and theme parks.

Many visitors also love to pick apples from a local orchard. A landmark hotel stands next to the historic Fort William Henry, which the British built in 1755.

Location: About 35 miles south of Rochester in central New York.

About: With a name that translates to “the chosen place,” this enchanting lakeside community gives a satisfying taste of small-town life in New York. Like the other Finger Lakes, Canandaigua has opportunities for those who love water sports.

Enjoy a hike among the majestic hills or browse shops and galleries. Take some time to explore tour historic mansions before embarking on the 22-mile Canandaigua Lake Wine Trail.

Location: In the city of Fayetteville, about 10 miles east of Syracuse.

About: This 65-acre lake is the centerpiece of Green Lakes State Park and is known for its unusually vibrant color. It was formed by glaciers and is meromictic, meaning there are distinct layers of surface and bottom waters.

You might think for a second you’re in the Caribbean when you see the mesmerizing blue-green shade! A nearly two-mile trail loops along the shore that you can hike on.

Location: In the center of the Finger Lakes, extending between Geneva and Watkins Glen.

About: This is the biggest of the Finger Lakes by volume because it’s about 38 miles long and almost 620 feet deep in places. The fishing is so good here they promote it as the Lake Trout Capital of the World.

With miles and miles of shoreline, there are almost endless waterfront activities. Along the Seneca Lake Wine Trail, you could theoretically sample more than 600 different wines.

Location: In Yates County, about 60 miles southeast of Rochester.

About: Because it’s shallower than the others, this “middle” Finger Lake is popular for swimming. That makes the beach and campground at Keuka Lake State Park the place to be in warmer months.

You can also do some boating or trout fishing with an excellent view of slopes covered with grape vineyards. Due to its shape, some call this lake Crooked Lake.

Location: In the Adirondack Mountains in northeastern New York.

About: This longtime resort destination is probably best known as the site of the 1980 Winter Olympics. That means you can get your fill of ice skating and downhill skiing when the weather’s right.

You can even do some cliff diving from Lake Placid itself, which is just north of the village of the same name. The Olympics museum is a must-visit, and so is the picturesque Mirror Lake.

Location: On Shawangunk Ridge in Ulster County, near the Catskill Mountains.

About: One of five so-called Sky Lakes, Lake Minnewaska isn’t in the Catskills, but you can see them from there. Scenic overlooks are some of the most popular areas at the 22,000-acre Minnewaska State Park Preserve.

The lake is about a half-mile long and an eighth of a mile at its widest point. A unique feature is the ice caves, which are crevices with constant cold temperatures regardless of the outside weather.

About: Some of the other lakes in upstate NY are puddles compared to this gigantic waterway. Lake Champlain, which separates New York from Vermont and Canada, is 120 miles long and up to 14 miles wide.

Because of its size and navigational importance, some call it “the Sixth Great Lake.” There are more than 70 islands on the lake. The towns and cities on its shores include Plattsburgh, Ticonderoga, Colchester, and Burlington, VT.

Location: Near Syracuse toward the end of the Finger Lakes area of Central New York.

About: The name means “long lake,” and it’s 16 miles on average and 1.5 miles wide. It has long been popular for sailing and fishing and attracts a lot of attention for its stunning beauty and almost pure water quality. Instead of traveling through a traditional filtration pump, the water only requires treatment with chlorine and fluoride for drinking.

Location: Along the northern edge of upstate New York.

About: Though it’s the smallest of the five Great Lakes, Lake Ontario stretches nearly 200 miles. This vast body of water covers a total of 7,340 square miles and separates New York from Ontario.

At 243 feet above sea level, it also has the lowest elevation of all the Great Lakes. Niagara Falls and the famed Thousand Islands are among the many attractions in this beautiful region.

Are Lakes in Upstate NY Worth Visiting?

Upstate New York is so diverse that it’s easy to understand why New Yorkers head there so often for a quick getaway. The good news is you can go there for many reasons, not just as an escape from a congested city.

The numerous lakes in this area help to make it so magical. You can take in typical water activities like boating, fishing, and even swimming if it’s warm enough. You can hike along the shorelines and enjoy breathtaking views, as well. Or you can explore the many unique and welcoming communities that have sprung up alongside the lakes in upstate New York. 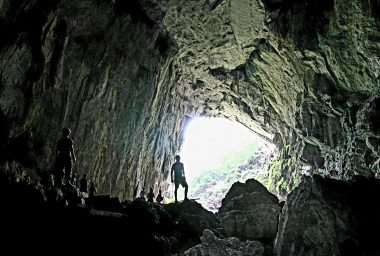 What Is the Cave of the Evil Spirit? 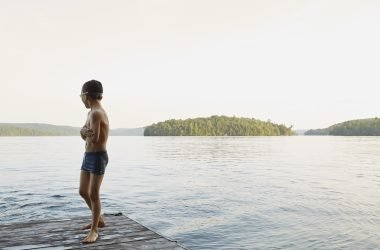 Plan Your Perfect Beach Day at These Lake Ontario Beaches