You might think of natural hot springs or high-end spas as the best places to go for a rejuvenating bath. As an offbeat alternative, try the Kennedy School in Portland, which is famous for its soaking pool.

Maybe taking a luxuriating plunge inside a school doesn’t add up. We’ll explain what the Kennedy School soaking pool is and why you should try it! Let’s dive in.

What Is the Kennedy School Soaking Pool?

It takes a creative mind or two to renovate an old elementary school like this one. A company specializing in out-of-the-box transformations turned the school into a brewpub, restaurant, and hotel.

It’s filled with art that tells the history of the place, and it has a heated pool. The pool is not for swimming, though. Because it’s only four feet deep, the beautifully-tiled Kennedy School pool is for soaking only.

There’s no space around the edges for lounging, though you can certainly order food and drink. It’s in a courtyard where the teachers’ lounge used to be. The tropical plants around the perimeter help give it a lush, inviting atmosphere.

Don’t come here expecting relief from the summer heat. The chlorinated saltwater is constant at 102 degrees, relaxing and refreshing.

The Kennedy School soaking pool is open from 10:30 a.m. to 6:30 p.m. to the general public. That includes minors as long as an adult accompanies them.

As this was a former school, you might expect the rules to be pretty strict, but they’re not. There’s no smoking, and you can’t bring outside beverages or containers. Swimsuits are a requirement, and horseplay, jumping, and diving are forbidden.

You can’t use pool toys, recreational flotation devices, bubble baths, soaps, or fragrances. The other written rule is one we wish applied everywhere: “Please be respectful of other guests.”

Traveler’s Tip: Oregon’s only island community is a must visit and, surprisingly, it’s not even on the coast!

Can You Stay at the McMenamins Kennedy School?

Kennedy Elementary School operated for 60 years in northeast Portland, starting in 1915. It lay vacant for over 20 years after shutting down in 1975. The new owners re-imagined it as a place for dinner, drinks, and overnight lodging.

Many of the 57 rooms are former classrooms with original chalkboards. A so-called English Wing, built on the school’s courtyard, has room themes and décor inspired by classic literature. Other guest rooms have the names of notable former teachers, students, and staff members.

How Much Does the Kennedy School Soaking Pool Cost?

You don’t have to stay at the hotel to take advantage of the Kennedy School soaking pool. Being an overnight guest has its privileges, however. They get the pool to themselves each morning from 8 a.m. to 10 a.m., free.

When the pool opens 30 minutes later to the general public, it costs $8 for adults and $4 for those ages three – 11. There is no admission fee for kids two and under.

People who live in the immediate area can soak for free, too, and we think that’s pretty neighborly of the owners. They have to show a current driver’s license with their address, and the address has to be within a specific range.

To enjoy the Kennedy School soaking pool, you need to make a reservation. You can do it by phone up to seven days in advance. You also have to show a valid photo ID when you check in.

Don’t forget to bring your towel!

Where Is the Kennedy School Soaking Pool?

Being in the northeastern part of Portland, Kennedy School is convenient to the downtown area and just five miles from Phoenix International Airport. It’s at 5736 NE 33rd Ave, a couple of blocks south of NE Ainsworth Street.

The Kennedy School is just 3.2 miles from where Interstate Five intersects with U.S. 30 Bypass. From US30B, you can go south on State Highway 99 to NE Jarrett Street. Then cross over to 33rd Avenue, and it’s a straight shot past Albert Park to the school.

If you decide to stay overnight, you can take advantage of Portland’s Biketown rental program. There are four racks outside the school for those ubiquitous orange bikes.

What Else Can You Do at the Kennedy School Soaking Pool?

If soaking is not your thing, you have many other options at Kennedy School. There are six restaurants and bars serving up elevated pub grub, craft brews, wine, and spirits. The old school auditorium is now a movie theater (accessible to hotel guests) with comfy old furniture.

There’s often live music at Kennedy School, and you can book the place for private events. You can also entertain yourself with the whimsical, educational, and thought-provoking art throughout the building. The pieces include paintings and murals, mosaics and wood panels, plus creatively-arranged old photos and other artifacts.

To give yourself a tour of the artwork, pick up an informational pamphlet at the front desk at the old principal’s office.

The family-owned company behind the restaurants, pubs, and pools is McMenamins. Two brothers, Mike and Brian McMenamin are from Portland and opened their first restaurant in 1974. They were at the forefront of the microbrewery movement, opening Oregon’s first brewpub in 1985.

The preservation-minded McMenamins may be able to look backward and to the future simultaneously. Besides schools, they’ve revitalized old theaters, taverns, lodges, and even churches into vibrant contemporary businesses.

Today, the company has more than 50 unique locations. All properties are in the Pacific Northwest, and all have a one-of-a-kind personality.

Is Soaking in an Old Elementary School on Your Bucket List?

It’s tempting to say this place is “too cool for school.” In reality, it’s a textbook example of the McMenamins company’s ability to color outside the lines to create memorable experiences.

They have a fun and quirky approach to preserving history, which they call an attempt “to keep the past in the present.” Their creative slant on the classic neighborhood pub is equally refreshing.

Even if you’re not in the mood for a relaxing soak in a heated pool, the Kennedy School is worth visiting. If we lived in the area, we might even shoot for perfect attendance.

What is the quirkiest, most unique hotel or lodge you’ve visited? 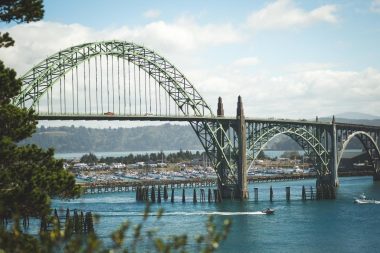 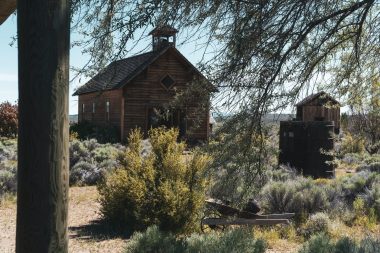