Don’t Pick Up the Hitchhiker of Black Horse Lake

Thumbing a ride was once commonplace, but not so much anymore. Once you hear about the hitchhiker of Black Horse Lake, you may never dream of giving a stranger a lift again.

Is there something to this legend that haunts a highway in Montana, or did someone’s imagination run wild? Let’s find out the truth as we ease to the side of the road to explore this Montana mystery.

Where Is Black Horse Lake?

Black Horse Lake is just a few miles north of Great Falls in Cascade County in north-central Montana. This is a major crossroads where several highways come together, including Interstate 15 and U.S. Highway 87.

Though Montana has many spectacular waterways, Black Horse Lake isn’t one of them. In fact, it’s dry for most of the year. And even after abundant rain, in spring and summer, it’s a small lake. It reaches just three square miles at its fullest.

Don’t Pick Up the Hitchhiker of Black Horse Lake

An unsettling legend looms over the area, whether the lakebed has water or not — the hitchhiker of Black Horse Lake. Reports of encounters with this mysterious phantom hitchhiker go back many years. Several generations of people who live in the Great Falls area may have heard the stories from an early age.

The various accounts almost always describe the hitchhiker of Black Horse Lake as a Native American man with long, black hair. He wears either a denim jacket or overalls and stands on the side of the state highway, signaling for a ride. However, just as the driver passes, the hitchhiker suddenly lurches in front of the car.

With a terrifying thud, he makes contact with the front of the vehicle. But when the driver pulls over to rush to the hitchhiker’s aid, they find no one there. The hitchhiker of Black Horse Lake has vanished. And, just as mysteriously, the car has no damage.

Traveler’s Tip: Do you know if hitchhiking is even legal these days? You might want to find out.

Is the Hitchhiker of Black Horse Lake off Highway 87 Real?

According to the story, the hitchhiker might be the ghost of a man killed while hitchhiking. So, in a sense, he continues to haunt this particular stretch of the highway and presumably always will.

There’s a problem, however. No one has found any actual evidence, like an accident report, to corroborate a hitchhiker’s death in the area. It’s more likely that this suspenseful tale is simply a made-up version of a classic ghost story. In other words, this urban legend has no basis in fact.

What Will You Actually See Near Black Horse Lake?

You may not see a tragic spirit wearing denim, but the Great Falls area offers many other unforgettable experiences. As for Black Horse Lake, this seasonal lake doesn’t have much to see.

It just depends on when you pass through. A much better bet, any time of year, is Benton Lake, just three miles up the road. It’s actually a 6,000-acre wetlands area part of the 19-square-mile national wildlife refuge.

Are There Other Urban Legends in Montana?

Most states probably have an urban legend or two. The hitchhiker of Black Horse Lake is just one of many in Montana.

There just seems to be something about this form of folklore that makes people want to localize it. For some reason, some communities find a creepy tale they can call their own.

Montana has many haunting stories, including accounts of ghosts terrorizing old hotels, mansions, and prisons. And some have supposedly seen a sea monster in Flathead Lake. The first sighting was reported in 1889.

Another colorful legend involves a mysterious young girl interacting with campers and hikers at Bear Canyon, near Bozeman, Mont. You can also hear an intriguing story behind the sandstone outcropping called Sacrifice Cliff in Billings.

According to legend, two young members of the Crow Tribe committed suicide there. The story says they were distraught because disease had wiped out the rest of their tribe. Consumed by grief, they reportedly blindfolded their horses and deliberately rode over the cliff.

Are There Other Hitchhiker Legends in the Country?

The story of a mysterious hitchhiker isn’t unique to Black Horse Lake. However, it may have some original details, like what the hitchhiker looked like. But the premise of the story follows a time-honored template.

Different versions of this same basic story have popped up in various places around the world from time to time. In some variations, the individual accepts a ride but disappears, leaving the driver to believe it was an angel.

What Else Can You Do Near Great Falls, Mont.?

With a population of around 57,000, Great Falls is Montana’s third-largest city. It’s a wonderful stopping point for those wanting to explore the region’s almost endless outdoor adventures. While in the area, you may want to check out Giant Springs State Park, the site of one of the largest freshwater springs in the U.S.

Many also enjoy kayaking, canoeing, and rafting on the Missouri River. Of course, it’s a major destination for trout fishing as is the Smith River, one of its tributaries.

The Mighty Mo, as many call it, played a critical role in the United States’ westward expansion. You can find out all about it by visiting the Lewis and Clark Interpretive Center. Cyclists can roll along the 53-mile River’s Edge Trail that links downtown Great Falls with the majestic outlying territory.

If you enjoy western art, don’t skip a tour of the C.M. Russell Museum, featuring a noted cowboy artist from the area. But the space also exhibits the works of many others. You may also want to sample a brew or two at one of the area’s favorite watering holes.

The Sip ‘n Dip Lounge is sometimes called one of the world’s best bars. You’ll find numerous contemporary brewpubs, too, many of them in repurposed historic buildings. Apart from the hitchhiker of Black Horse Lake, you can visit other haunted places in Great Falls, such as the New Park Hotel.

The Hitchhiker of Black Horse Lake: Fact or Fiction?

If you’re traveling near Black Horse Lake, you may or may not see a hitchhiker. The question is, do you slow down and drive cautiously or pull over and offer a ride? You might come across a fellow traveler down on their luck or a troubled spirit from beyond.

Chances are, of course, that you won’t see a hitchhiker at all. You may not see a trace of Black Horse Lake, either, especially if there hasn’t been much rain.

Have you ever picked up a hitchhiker on your travels? Tell us about your experience in the comments below. 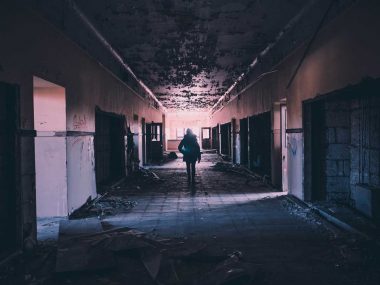 Would You Be Too Scared to Visit These Abandoned Places in Idaho? 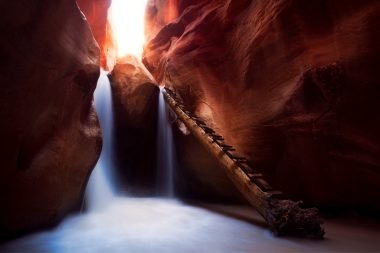 This Desert State Has Some of the Best Waterfalls