The (Mostly) Abandoned Town of Goldfield, Nevada, Is Spine-Chilling

You probably have planned stops in Las Vegas, Reno, and Carson City when traveling through Nevada. Maybe you’ll cross into Death Valley National Park and experience the lowest land point in America at Badwater Basin. You probably don’t have Goldfield, Nevada, on your must-see places itinerary.

But if you want a scare, you might consider venturing down Highway 95 to explore this once-booming gold mining town. Let’s learn more.

Where Is Goldfield, Nevada?

The county seat of Esmeralda County, Goldfield, Nevada, lies off Highway 95, less than three hours from Las Vegas. The town is east of Montezuma Peak and northwest of Stonewall Mountain.

The town of Tonopah is about 30 minutes north at the junction of Highway 95 and Highway 6. About 300 people call Goldfield home.

During the first decade of the 1900s, Goldfield, Nevada, boomed from the gold rush. In fact, gold exploration continues today.

Sadly, a fire destroyed much of the town in 1923. The Goldfield Hotel, the Consolidated Mines Building, and the high school remain.

Notable people who lived in Goldfield include Wyatt and Virgil Earp. Virgil, the deputy sheriff, contracted pneumonia and died in 1905. Other important residents include George Wingfield and George Nixon, who became business partners and invested in mining and real estate.

Nixon, who by this point was a millionaire, became a U.S. Senator for the state of Nevada in 1904, while Wingfield continued to invest in property. He made a fortune and owned almost all of the gold mines.

Traveler’s Tip: Nevada is full of paranormal stops, including the abandoned Horton Mine that has the internet officially creeped out.

What Happened to Goldfield, Nevada, to Make the Population Decline?

Goldfield, Nevada, thrived from 1902, when someone discovered gold, to about 1907, when the gold output reached $8.4 million. But its success was short-lived. The cost of pumping brine out of the mines was just too expensive.

Then in 1912, the largest mining company in Goldfield left. A few years later, a moonshine distiller exploded, causing a devastating fire, leaving only the brick and stone buildings intact.

Goldfield never recovered. Although not a ghost town, only a few hundred people still live there.

What Happened at Goldfield High School?

In the early 1900s, Goldfield built four schools to keep up with its booming population. But once the mining town residents left, the community didn’t need the four schools. In addition, the fire of 1923 destroyed everything except the Goldfield Hotel and Goldfield High School.

By 1953, the high school building was completely abandoned. Over the years, it deteriorated due to lack of maintenance. Some people even say it’s haunted.

Save America’s Treasures is a public-private partnership between the National Park Service and the National Trust for Historic Preservation established by President Clinton. In 2008, the Goldfield Historical Society applied for and received a $296,000 matching grant from the Save America’s Treasures program. The purpose of these funds was to restore and rebuild the Goldfield High School.

More grants and funds arrived through 2014, which helped rebuild the south wall of the school. The project finished in 2015. Since then, the Goldfield Historical Society has continued raising funds and applying for grants to complete the rebuilding process.

Recent repairs include adding new railings and stairs, rebuilding the east wall, and installing a new roof. The Goldfield Historical Society still has work to do but feel determined to restore the Goldfield High School building completely.

The town itself isn’t haunted, but some say the historic Goldfield Hotel is. Back in the early 1900s, the Goldfield Hotel was a prime stopover for politicians, gunslingers, and successful bankers. Its opulence was well known.

Each room had a telephone, lights, and a heating system — all luxuries at the time. A rare elevator was installed, and leather benches and crystal chandeliers filled the lobby.

But today, the hotel tells a different story. According to Travel Nevada, the Goldfield Hotel is one of the most haunted places in Nevada. The hotel is said to have a roster of “permanent guests.”

One of those guests is Elizabeth, George Wingfield’s mistress, who became pregnant with his child. The story goes that he chained her to a radiator during her pregnancy, where he fed her and gave her water. But after she delivered the child, Elizabeth disappeared. Some people claim he killed her and threw the child into a mine shaft.

During public tours, visitors claim to have seen Elizabeth’s apparition crying out for her baby at the hotel. Many ghost hunters come to examine the paranormal activity.

Even Zak Baggins from “Ghost Adventures” has captured footage of paranormal activity at the Goldfield Hotel. In one episode, as the TV crew explores the basement, the most haunted place inside Goldfield Hotel, a brick flies up from the ground and scares them away.

Others claim the high school is also haunted. The Historical Society has done plenty of work to make the outside appearance presentable. But once inside, you’ll see chalkboards from the 40s and 50s, old, dilapidated staircases, and the original chairs and desks from the early 1900s that may send a chill down your spine.

Do People Live in Goldfield, Nevada?

Every year, the people of Goldfield, Nevada, host the Goldfield Days, an annual celebration that includes parades, booths, food, and entertainment.

Land auctions also take place and draw crowds from all over the United States. In 2019, the land auction brought in $111,000.

According to the World Population Review website, most of the 300 people in Goldfield are white, middle-class, middle-aged Americans. The Goldfield Historic District includes Goldfield High School, Esmeralda County Courthouse, and the Goldfield Hotel.

Would You Visit Goldfield, Nevada?

If you’re into history, you may enjoy learning about the old mining town of Goldfield, Nevada. The almost overnight boom it experienced is amazing.

But if you want a spooky experience, you might also find it here. There’s an eeriness that accompanies abandoned buildings.

Even with the restoration project of Goldfield High School, visitors may still get a sense that spirits and secrets hide in the halls of the school and hotel.

Is paranormal activity your thing? Will you be visiting Goldfield, Nevada, in the future? 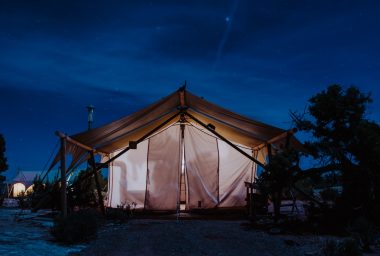 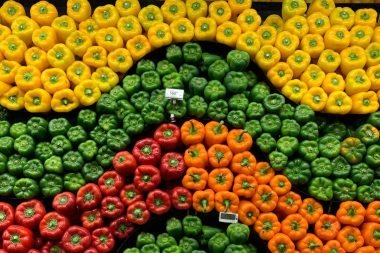 Everything's On the Menu At the International Market in Las Vegas