Home West Wyoming What Is the Devils Tower Legend?

What Is the Devils Tower Legend?

Devils Tower is one of the strangest and most iconic natural creations in the United States. From the minute you lay eyes on the massive geological wonder, you’ll feel it beckoning you to explore. However, we think every visitor should know about the Devils Tower Legend before visiting the park.

So what is the Devils Tower Legend? Let’s look and see!

Where Is Devils Tower?

You’ll find Devils Tower National Monument in Wyoming’s northeast corner. It’s about an hour and a half drive from Sturgis, South Dakota. It’s a must-see visiting the Black Hills of South Dakota or crossing the state’s northern region toward the Yellowstone and Grand Teton national parks.

Traveler’s Tip: While in Wyoming, make sure you check out these Quaint Small Towns in Wyoming You Have to Visit.

What Is Devils Tower Famous for?

Devils Tower is famous for being a sacred site for the indigenous peoples of the Great Plains. It continues to be a popular spot for rock climbing in the area. Many people recognize Devils Tower from pictures for its unique shape and stature. Once you see something so special and impressive, it’s hard to forget.

However, what brought Devils Tower into pop culture fame was Steven Spielberg’s 1977 film Close Encounters of the Third Kind. Devils Tower played a prominent role in the film and was the site of an alien encounter. The film helped spotlight the out-of-this-world rock formation. The year following the movie’s release, park attendance was up 76% and rose 113% in less than a decade.

Why Is Devils Tower Sacred?

The Black Hills was home to six tribes; Lakota, Cheyenne, Crow, Arapaho, Shoshone, and Kiowa. However, an additional two dozen or so individual tribes have an association with Devils Tower. For these tribes, Devils Tower has always been a sacred place and the site of many religious ceremonies.

The tribes passed down oral histories and narratives to explain the creation of Devils Tower and its significance to their people. Currently, personal and group ceremonies take place at Devils Tower. Sweat lodges, sun dances, and prayer offerings are a few of the many religious traditions that occur here. If you see objects related to these religious ceremonies, you should leave them alone and not disturb them.

What’s On Top Of the Tower?

If you reach the top of Devils Tower, you’ll find chipmunks, mice, pack rats, and snakes. Many of these creatures spend their lives on the 1.5 acres of land above the Belle Fourche River.

What Is the Devils Tower Legend?

Tribes in the area have oral histories; some might call myths or legends to connect their people to nature. They pass these stories down from one generation to the next and continue to this day. The National Park Service shares each of the Devils Tower Legends for various tribes in the area.

What Created the Tower?

Geologists have studied Devils Tower since the late 1800s and are still trying to pinpoint what could have formed the structure. Maybe the Devils Tower Legend is onto something. Geologists know that the Tower is a rare igneous rock, phonolite porphyry, and is the most substantial structure of its kind.

Despite 150 years or so of research, scientists can’t agree on the process that formed the rock. Many confirm that the structure is the result of cooling magma, but how it cooled and got there is highly debatable. Erosion likely played a significant role in the creation of the Tower and probably erased all evidence to help scientists discover its origin.

Traveler’s Tip: Learn more Wyoming legends for your trip. Find out the Legend Behind the ‘Crazy Woman’ in Wyoming.

Can You Climb Devils Tower?

Devils Tower is a paradise for rock climbing enthusiasts. The unique structure and impressive views make it an excellent place to climb. Climbing difficulties range from 5.7 to 5.13, and many routes are not bolt-protected, so you’ll need to use camming devices or other temporary anchors. Climbers must register at the climbing kiosk before climbing the Tower, and failing to register could get you a fine or citation.

When climbing at Devils Tower, your safety is your responsibility. You should know how to use and inspect your gear before climbing. It’s also wise to wear a helmet to protect yourself from falling rocks and debris. If you’re new to climbing, you can hire climbing guides to assist and provide all the gear for your adventure.

Is the Devils Tower Legend Real?

The Devils Tower Legend is an oral narrative that many Great Plains tribes pass through generations. These stories provide tribal members with a connection with nature and the spirit world. While these oral histories might seem far-fetched to some, they’re simply another explanation for how this massive rock structure appeared out of nowhere. Because scientists can’t agree, maybe one of the Devils Tower Legends might be the cause. It looks like the origin of this rock will remain a mystery.

Will you visit or climb Devils Tower on your next adventure? Tell us in the comments! 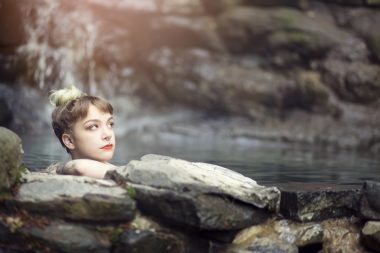 Your Guide to the Black Rock Hot Springs in New Mexico

New Mexico Ghost Towns That Will Send Shivers Down Your Spine