Home Northeast Massachusetts The Story Behind the Oldest Tavern in America

The Story Behind the Oldest Tavern in America

If you love bars with a long history, it may be hard to beat the Bell in Hand Tavern. It’s close to a lot of the action in Boston and has a remarkable claim of longevity. Let’s look into this welcoming watering hole’s history and why it continues to draw visitors more than two centuries later.

What Is the Oldest Tavern in America?

In a city that’s rich with history, the Bell in Hand proudly hails itself as the oldest tavern in America. As the story goes, it’s where some of our founding fathers enjoyed a bit of drink and conversation in their twilight years.

But wait, aren’t there other bars around the United States that say they’re the oldest? Yes, there are, and perhaps it’s important to look carefully at what they claim. The Bell in Hand says it’s the “oldest, continuously operating” tavern and freely admits it has had several locations.

A few other bars around the country may also be contenders for the “oldest” crown. They include White Horse Tavern in Rhode Island, Fraunces Tavern in New York City, Jessop’s Tavern in Delaware, and Jean Lafitte’s Blacksmith Shop in New Orleans.

Where in Boston Is the Bell in Hand?

The Bell in Hand Tavern is near the waterfront on Union Street in historic downtown Boston. Today it’s overshadowed a bit by a modern development called Government Center, which includes City Hall, state agency offices, and an open-air plaza. The Bell in Hand is just steps away from the historic Faneuil Hall.

Sometimes called “the Cradle of Liberty,” it’s the actual building where colonists met to plan the American Revolution. This is a very popular area for tourists because it’s literally where old meets new.

You can visit many of Boston’s historic sites and check out all the retail shops surrounding them. You can also catch a trolley here to take in other parts of the city. It’s just a lively area with a lot going on.

What Is the Bell in Hand Tavern Known For?

From its beginnings, the Bell in Hand attracted people from all walks of life. In its own written history, it describes itself as “a gathering place for printers and politicians, sailors and students.”

One of those early regulars was statesman and famed orator Daniel Webster. He may have had drinks alongside other early American luminaries such as Paul Revere and Samuel Adams.

Traveler’s Tip: What would it have been like to stroll down a road in 19th-century Boston? Visit Acorn Street in the Beacon Hill district to find out!

What Is the Story Behind the Bell in Hand Tavern?

The tavern’s name is a reference to its owner’s profession. Before he got into the bar business, Jimmy Wilson was the town crier. That means he was responsible for spreading the news back in the day.

This was way before Twitter, of course. And though there were certainly newspapers back then, much of the population was illiterate. The town crier would get town folks’ attention by ringing a bell.

Then he would verbally relate the important news of the day. It could include changes in laws and ordinances and other critical information.

When Did the Bell in Hand Tavern Open?

The Bell in Hand claims its “first pour in 1795,” which is almost 20 years after America won its independence from England. Wilson had retired from his job as town crier, but of course, he was well known. We imagine that he knew how to get the word out pretty effectively about his new business!

Who Owns the Bell in Hand?

Keeping the tavern’s traditions alive after more than 200 years is current owner Eddie Kaplan. He maintains a cozy atmosphere with a historical accent on the ground floor of the storied tavern. He accommodates larger, sometimes rowdier, crowds upstairs, where there’s more of a nightclub feel.

What to Order at the Bell in Hand

In those early days, the owners served up ale instead of hard liquor, and that tradition continues. There’s a full bar now, but for tradition’s sake, we’d recommend you raise a hearty, frothy mug of beer in Jimmy’s honor. Or you could order up a hard cider, which was actually more popular than beer in colonial times.

Is the Bell in Hand Tavern Worth Visiting?

There’s so much to see in downtown Boston that it’s hard to take it all in. In its current corner location, the Bell in Hand is incredibly inviting, and some even say it’s a quintessential Boston experience. In that sense, it’s almost impossible to pass it by, even if you don’t completely buy into its claims of being America’s oldest tavern.

We have to admit it’s a fun topic to debate, and we can hardly think of a better setting for it. It’s a sociable place with lots of cool offerings on tap and stories from the late 18th century.

The Bell in Hand isn’t completely stuck in the past, though. After dark, it transforms into a lively nightspot with live music or a DJ. We’d recommend stopping in earlier in the day to get a better feel for this historic space. 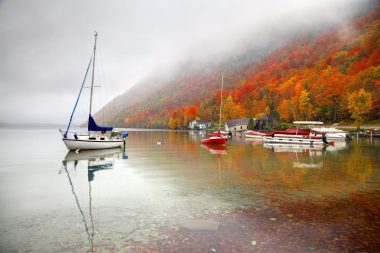 Everything You Need to Know About Lake Willoughby in Vermont 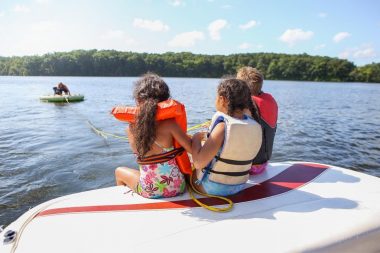 Cool Off in These Lakes in Massachusetts