Are There Still Amish Villages?

The Amish certainly have an air of mystery, but visiting their community can be pretty revealing. The Amish Village sheds light on their unique culture while maintaining the privacy that Amish families value so greatly. This attraction is located in a place that’s been the heart of Amish country in America for nearly 300 years. It’s a way for outsiders like us to get an inside look at the Amish way of life. Let’s check it out.

Who Are the Amish?

With their plain and often drab wardrobe and lack of modern conveniences, the Amish may seem comically outdated to some. But it’s hard not to admire their strict adherence to their principles, including devotion to God and family.

The Amish people came to America in the mid-1700s so they could freely practice their religion. They are members of the Plain Community, which also includes two other Anabaptist sects, the Mennonites and the Brethren.

They left various European countries, including Switzerland and Germany, to escape religious persecution. The word “Amish” derives from the name of a Swiss minister named Jakob Amman.

Historically, the Amish have been a self-sufficient, farming-based community. In recent decades they have diversified into other commercial operations. They prefer rural life, away from urban centers, and typically travel in wooden horse-drawn buggies they build themselves.

The first Amish to arrive in America settled in Pennsylvania and Ohio. These days, they’ve branched out to more than half of the 50 states and Canada, as well.

That means traditional Amish villages lie scattered around North America, with larger concentrations in a few areas. Most of them are somewhat closed off to the public or at least don’t openly welcome visitors.

That’s by their choice, of course. They believe that isolating themselves strengthens their connections with God and each other.

Which State Has the Largest Amish Population?

Far from being a vanishing segment of society, the Amish population in the United States is fast-growing and numbers nearly 370,000. Pennsylvania claims the most Amish, with a recently reported population of 86,965.

Ohio is in second place with 81,730, but there have been times over the years when Ohio had the most. The state with the third-largest Amish population is Indiana, with 62,800.

How Do I Visit Amish Country?

To get an even clearer picture of Amish culture, visit Lancaster County, Pa. This area is home to around 40,000 Amish, and it’s a place where the larger community openly embraces its Amish connections.

This so-called Pennsylvania Dutch County is where you’ll find a public attraction called Amish Village. It’s in the tiny town of Ronks, just north of Strasburg. It sits about 33 miles east of the city of York and about 64 miles west of Philadelphia.

The Amish Village, with an 1840s-era farmhouse at its center, is a faithful representation of a working Amish community. To make sure it’s authentic, there are current and former members of the Amish faith to help with the tours.

They offer tours every day from 9 a.m. to 5 p.m. You can just show up and wait for the next one, but it’s better to make reservations ahead of time.

Traveler’s Tip: Learn more about your personal beliefs at This Secret Monastery You Need To Add To Your Bucket List.

How Long Is the Amish Village Tour?

Touring the 12 acres of the village can be a reasonably quick experience, but there’s no need to rush. In fact, many visitors like to linger a while on the beautiful grounds, even having a picnic lunch.

The other attractions include a one-room schoolhouse, a barn with farm animals, a blacksmith shop, and a village store. In addition, there’s a smokehouse market and a windmill and water wheel to enjoy.

The Amish Village offers a Premium Package that also includes a 90-minute bus tour of the surrounding Amish country. A narrator provides insight into the local customs, traditions, and lifestyle. The tour usually includes a stop at a local Amish-owned business.

Why Do Amish Not Use Electricity?

To say that the Amish don’t use electricity or avoid technology isn’t exactly correct. It’s more complicated than that.

Different Amish sects, or subgroups, have varying beliefs about modern society, and their views do evolve. Generally, they aim to be as independent from the outside world as possible. They believe this practice of staying “off the grid” strengthens their families and religious organization.

So while they are wary of becoming utility customers, they aren’t opposed to the benefits. Amish artisans have for years used hydraulic and pneumatic tools. Many of them have embraced solar panels and generators, as well.

What Language Do Amish People Speak?

Many people mistakenly believe that the Amish are Dutch, but the term “Pennsylvania Dutch” actually refers to their Deutsche language. It’s a particular dialect of German that’s sometimes called Swiss-German or Pennsylvania German.

But most Amish are multilingual, in fact. They have to be able to communicate in English, as well, and they use formal German in church services.

Is It Worth Visiting the Amish Village?

Whenever you’re in this part of the country, we do recommend that you make time to visit the Amish Village. It’s a fairly short drive from cities like Philadelphia and Baltimore, and in some ways, it’s like going back in time.

An inside look into another culture is always eye-opening. There’s no question you’ll learn more about Amish beliefs and lifestyles. On top of that, the tour is a relaxing, wholesome activity in a bucolic setting – the lush farmland of southeastern Pennsylvania.

What You Need to Know About Zoar Valley Before You Go 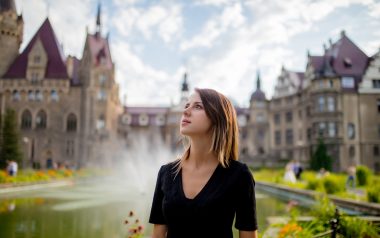 Live Out Your Fairytale Daydreams at These Castles in New York