Millions of people flock to Florida for vacation.  Most of them visit Florida for the white sand beaches. And even more, come to experience the magic of Disney World. But what about paying a visit to Ybor City, Florida? We’ve got 9 great reasons to check out this historic neighborhood in Tampa.

Located northeast of downtown Tampa, Ybor (pronounced EE-bore) City was founded in the late 1800s. During that time period, a variety of cigar manufacturers made this area home to some of the world’s finest cigars. Thousands of immigrants from Cuba, Spain, and Italy created a life here full of wealth and economic stability.

That is until the Great Depression hit followed by World War II, reducing the need for fine cigars. The revitalization of this historic and diverse district began in the 1970s. Thanks to people seeking culture, history, and constant entertainment, Ybor City soon flourished again. Now it’s known for more than just its world-famous cigars.

What is Ybor City Known For?

Today, Ybor City is known for its boutiques and vintage shops along with its entertainment district all housed along 7th Avenue. Staying true to its cultural heritage, you’ll also be able to find many Cuban and Latin American restaurants here.

But what Ybor City, Florida is really known for, even today, are its cigars. Often called the Cigar Capital of the World or CIgar City, this is THE place to purchase fine cigars. And while you’re at it, it is also the place to connect with a cultural heritage that has stayed true to its past for over one hundred years.

There are many reasons to visit Ybor City, Florida. From mouth-watering restaurants to museums and breweries to live music and more. And of course, the cigars. We’ve got 9 of those reasons listed right here.

Celebrating history, culture, and cuisine, The Columbia Restaurant is Florida’s oldest eatery. For five generations and over 115 years, this cultural piece of history has been owned by the same family since its opening in 1905.

You’ll come here to dine on delectable Spanish food, but you will come back because of the culture that is celebrated here every day. Enjoy live music while dining on traditional Spanish food such as tapas, seafood, postres, and more.  Their beverage menu is also quite extensive.

In the past, cigar workers came here for Cuban coffee and sandwiches. Now,  it hosts people from all walks of life including many famous athletes and entertainers from around the globe. Although they now have seven locations, all are still operated by the same family and all offer the high-quality Spanish food everyone has come to expect from The Columbian Restaurant.

Not only are there 5,000 people in residence in Ybor City, Florida, but there is also a flock of red chickens and roosters that call this townhome.  And by home, this means they wander the streets of Ybor City, not just live in someone’s backyard.

The Ybor Chickens Society cares for the wildfowl that inhabit several neighborhoods throughout town. They literally have the run of the town here. Visitors generally enjoy watching the chickens doing their thing, but this enjoyment can often lead to wanting to feed the chickens.

While the City of Ybor may encourage you to do a chicken dance with them, please do not feed the chickens.  They’d rather have that taken care of by the Ybor Chickens Society, keeping them as wild as they can be.

The Ybor City Museum provides multi-disciplinary programs and exhibits highlighting the culture and history that is Ybor City. From a melting pot of different foods and recipes to share to artifacts from its rich past to interactive exhibits, you’ll feel as though you’ve been here since the cigars were.

Some of the events and programs hosted at the museum include Building Alive! The Ybor City Architecture Hop, Traces of Cuba, and The Jewish Roots of Ybor City. Located in a 1923 era style home typical of a cigar worker’s home, the museum is open to the public for a small fee. Memberships are also available for those who would like to visit more often.

You Can Take a Cigar Tour

Once known as The Cigar Capital of the World, one of the greatest things to experience when visiting Ybor City, Florida, is a cigar factory tour.  There are several tour operators available to take you through a cigar tour, including one of the oldest, Tabanero Cigars.

Regardless of your tour choices, embarking upon a cigar tour will give you a real taste of the past. You’ll learn how the cigar industry played a huge role in shaping Tampa’s history. You’ll tour a humidor and learn all about the cigar aging process. You’ll come away with an understanding of different aromas of aged tobacco leaves that create specialty cigars. Watch the professional cigar rollers at work and even learn how to cut, punch and light a cigar the proper way.

Here, you’ll find memorial statues to two heroes of the Cuban Independence, along with actual Cuban soil. The park is only open on weekdays. When closed, behind the gates, you can still view the entire park.

The Mutual Aid Societies in Ybor City, Florida were formed for two main reasons –  the political and health needs of the factory workers. There was a common thread between all the immigrants working in Ybor City, the cigar factories, but some differences caused issues. Due to scant medical facilities and political division, there was a need for intervention.

Mutual Aid Societies were able to provide this intervention along with social welfare for those in need. Five societies were formed and those five societies still remain active today. They provided social, cultural, and educational programs as well as provided political conversations, health care services, and much-needed community space.

Today, the five societies continue to offer the above services as well as a place to relax for a drink and entertainment, but more importantly, a continued connection to their heritage. The five societies are La Union Marti-Maceo, El Centro Español, L´Unione Italiana, El Circulo Cubano, and Centro Asturiano. Most of them have retained their original clubhouses from the early 1900s, and they are located throughout Ybor City and Tampa.

Live Music at The Orpheum

There’s nothing quite like live music. And experiencing live music at the Orpheum offers an evening of entertainment unique to Ybor City, Florida.  With the roots here made up of immigrants mainly from Spain, Italy, and Cuba, the music that arises from this venue pays homage to those roots. Along with those local artists, you’ll find many well-known ones from all across the globe that love to play here, too.

Located in the heart of the entertainment district, the Orpheum hosts musical artists almost nightly, along with a DJ and a full bar. When not hosting music, you’ll find a wide array of events including art shows, professional wrestling, and even dance competitions.

A town is not complete unless it is home to some local brews.  At Coppertail Brewing Company, you’ll find plenty of local handcrafted brews on-site. Around 20 at a time to be exact. Along with the local beer, you’ll also enjoy the local flavors on small plates.  Bring your kids, your dogs, and your craft beer taste buds.

Started from a five-year-old’s tale of an enormous sea creature she deemed as Coppertail, this local hangout was dubbed Coppertail Brewing Company. Each relic of the taproom is a story in itself highlighting Tampa’s history. Come for a drink or come for a tour of the brewhouse in this Ybor City historic building that’s over 100 years old. Whatever you show up for, you’ll leave with a story all your own.

Shop for gourmet foods, fresh produce, and creative arts.  Looking for baked loaves of bread, herbs, and plants? How about pet treats? And a market in Ybor City, Florida, wouldn’t be complete without cigars available to purchase. Located in the historical Centennial Park, it is open every Saturday from 9 am – 3 pm and at no cost to you.  At least to get in.

Ybor City, Florida. While you may not find peaceful beaches or Mickey Mouse magic here, you will most definitely find peace and magic. It may be through a cigar factory tour or strolling through the Saturday Market. And it may not be what you expected from a Florida vacation. But it will offer the magic of history, culture, entertainment and, of course, cigars.

15 Unique Things To Do in Artsy Jerome, Arizona 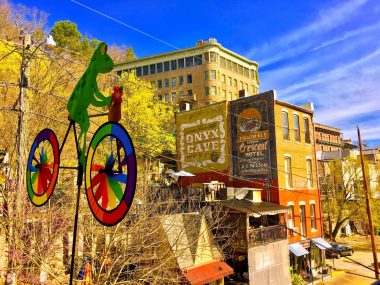 12 Best Things To Do in Eureka Springs, Arkansas