Just a few miles from the U.S.-Mexico border lies the small mountain town of Bisbee. This former mining town turned artist colony is full of hidden treasures that are well worth the trip. Join us as we take a closer look at this bohemian border outpost!

Bisbee opened as a mining town after precious minerals and metals (copper, gold, and silver) were discovered in 1880. Within 20 years, more than 20,000 people had come to the town to work the mines or support the growing community. The town’s population swelled and shrank over the decades as mining fortunes came and went, sometimes down to just a few thousand people.

The closing of the Copper Queen Mine in the 1970s sparked a major transition for Bisbee. Many former mineworkers and their families left. Artists and creative types replaced them, drawn by the affordable living and beautiful scenery.

Today, Bisbee exists as a unique mix of mining history, art, and nature.

Travelers generally consider spring to be the best time to visit Bisbee. From March through May, high temperatures range from the upper 60s to the low 80s, and you’ll deal with relatively no rain or other bad weather, as well as fewer tourists. Summers in Bisbee aren’t quite as hot as you might expect, with highs in the upper 80s or low 90s due in part to the town’s elevation, which is  over 5,500 feet above sea level. December and January are generally the coldest, and July and August are the year’s wettest times.

Some might say Bisbee is one big hidden gem itself! Let’s take a look at some of the town’s must-see attractions.

Downtown Bisbee is a bit of a trip back in time, so it only makes sense that the town would have some great antiques. Located over three floors at the town’s former bank, the Miners and Merchants Antique Center is home to more than a dozen antique dealers. You can find anything you can dream of there: furniture, clothes, artwork, coins, toys, jewelry, and more other items than we could list. The center is open seven days a week, so you can pop in whenever you’re in town.

Living in Bisbee back in its heyday could be challenging, but the Mulheim Heritage House museum will show you how it could also be quite refined. This beautifully restored home is an excellent example of 19th-century architecture in the area. The property’s guided tours also show off various historical artifacts from the late 1800s through the early 1900s.

For a more comprehensive look at the people and activities that defined Bisbee’s prime, head to the Bisbee Restoration Museum. It shows off the town’s pride in its history. All of the museum’s items were either donated or are on loan from Bisbee residents. Items range from the mundane (clothing, tools, cookware) to the bizarre (like a stuffed double-headed cow!)

Bisbee, Arizona, became a haven for artistic types in the later part of the 20th century and remains a town that still values art. One of the best places to see work from those with ties to the area is the Belleza Fine Art Gallery. Check out elegant and eclectic work from more than a dozen artists. Be prepared if you’re looking to buy – some of the art can be a bit on the pricier side.

Bisbee’s very own microbrewery, Old Bisbee Brewing, has become a community staple since its opening in 2010. With about a half-dozen different types of beer and a small food menu, the brewery’s taproom is a great place to grab a drink, a bite, and relax after a busy day around town. If you sit outside, you can also enjoy views of the Brewery Gulch. Tours of the brewery are also available.

The Bisbee Seance Room claims the town is the most haunted in America. So why not check in with the spirits while you’re here? The theatrical seance allows you to hear from some of the town’s most famous ghosts. Part history talk, part magic act, it’s a great way to learn about the past while enjoying a great show at the same time.

It’s not often a post office pops up on a list of can’t miss attractions, but the Copper Queen is worth a visit. The U.S. Postal Service has occupied this distinctive building for more than a hundred years. Due to Bisbee’s hilly topography, the town has never had home mail delivery, so residents must go to the post office to pick up their mail. Make sure to check out the vintage charm of this historic building. Bisbee’s town library is located on the building’s third floor. I

Described as a “1950s post-apocalyptic landscape.”  Lowell was initially a town in its own right but became part of Bisbee in the early 1900s. As mining companies widened a pit mine in the town, more and more residents left, turning the city into a ghost town. Rusting vintage cars, trucks, and buses still sit along Erie Street, in front of abandoned businesses. It may seem as if the town has decayed, but local groups maintain it as an example of the area’s history.

Bisbee, Arizona, wouldn’t exist without mining. The industry drew early settlers to the area and sustained the remote mountain town for decades. Learn the history of how mining shaped Bisbee and how the town changed after mining companies left. The museum is the first rural affiliate of the Smithsonian Institute, a national partnership that connects museums.

Without the Copper Queen Mine, there likely wouldn’t be a Bisbee. The massive mine was among the most productive of the town’s mines, helping produce more than 8 billion pounds of copper and nearly 3 million ounces of gold. The mine was closed in 1975 and now gives tourists a chance to see inside the historic site. You’ll don a hard hat and miner’s headlamp and head 1,500 feet underground for the tour, which is conducted by retired miners who worked the Copper Queen. This tour is an experience unlike any other, giving you a sense of what it was like for local miners, toiling long days underground in dangerous conditions.

Bisbee, Arizona’s history and culture, nestled high in the hills of southern Arizona, make it a town unlike most small mountain or border towns. Spend a day taking in this beautiful, unique place, and you’ll leave with memories you won’t soon forget! 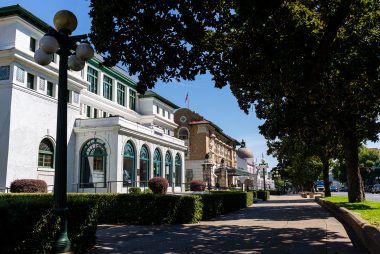 How to Spend a Day in Hot Springs, Arkansas 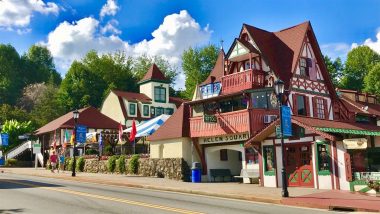 Top 10 Things to Do in Helen, Georgia